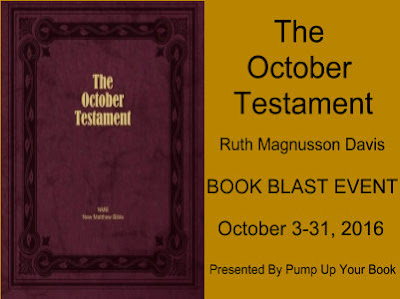 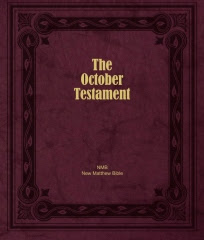 The primary author of the October Testament is the English martyr William Tyndale. This is his final New Testament translation of 1535. Two years later, his friend John Rogers first published these scriptures in a little-known but very important Reformation Bible called the Matthew Bible, which became the first authorized English Bible under King Henry VIII. A second edition was published in 1549, from which this update is made. Rogers was martyred in 1555, burned at the stake in Smithfield, England. The wine-colored cover, therefore, is symbolic of the blood with which this bible was bought. Ruth Magnusson Davis is founder and editor of the New Matthew Bible Project. Her work is to update the Matthew Bible: not to make a modern bible, but to keep the language of the original as much as possible, which she calls the real language of the faith. Because the KJV New Testament was largely taken from Tyndale, readers will find much that is familiar here, and beautiful, but will find it easier to understand than the KJV. Ruth, a retired lawyer, is a scholar of early modern English, the writings of William Tyndale, and the Matthew Bible. In 2009 she retired from professional practice in order to undertake this work full-time. In October 2015, she completed the New Testament, "The October Testament." Then she began work on the interior layout and attending to all the details of publishing. In March 2016 the October Testament finally became available for sale, and was immediately well received. Ruth's fine editorial hand is almost unnoticeable. Tyndale continues to shine through. Rogers' style in his annotations is distinctly his. Readers comment repeatedly on both the flow and the clarity of the New Matthew Bible scriptures, and also on the beauty of the original style, which Ruth, with her delicate touch, has masterfully retained.

The baptism, preaching, and office of John the Baptist, and how Christ was baptized by him in the Jordan.

In those days John the Baptist came and preached in the wilderness of Judea, 2saying, Repent: the kingdom of heaven is at hand! 3This is he of whom it is spoken by the prophet Isaiah, who says, The voice of a crier in wilderness: Prepare the Lord’s way, and make his paths straight.   4This John had his garment of camel’s hair, and a girdle of skin about his loins. His food was locusts and wild honey.a 5At that time Jerusalem and all Judea, and all the region round about the Jordan, went out to him, 6and were baptized by him in the Jordan, confessing their sins.  7When he saw many of the Pharisees and of the Sadducees come to his baptism, he said to them, O offspring of vipers, who has taught you to flee from the vengeance to come? 8Bring forth therefore the fruits belonging to repentance. 9And see that you ones do not think to say in yourselves, We have Abraham as our father. For I say to you that God is able from these stones to raise up children to Abraham. 10Even now is the axe put to the root of the trees, so that every tree which does not bring forth good fruit is hewn down and cast into the fire. 11I baptize you in water in token of repentance, but he who comes after me is mightier than I, whose shoes I am not worthy to bear. He will baptize you with the Holy Spirit and with fire. 12He has also his fan in his hand, and will purge his floor, and gather the wheat into his garner, and will burn the chaff with unquenchable fire.b  13Then Jesus came from Galilee to the Jordan, to John, to be baptized by him. 14But John stopped him, saying, I ought to be baptized by you, and do you come to me? 15Jesus answered and said to him, Let it be so
Isa 40:3
Mk 1:1-17 Lu 3:1-22 Joh 1:15-34; 3:22-36.
Now, for thus it behoves us, to fulfil all righteousness. Then John let him. 16And Jesus, as soon as he was baptized, came straight out of the water. And lo, heaven was open over him, and John saw the Spirit of God descend like a dove and light upon him. 17And lo, there came a voice from heaven, saying, This is he: my beloved Son, in whom is my delight.
Mk 1:11 Lu 3:22 Joh 1:32 2Pe 1:16-18
Locusts  (3:4)
Wheat and chaff (3:12)
The Notes

a) According to Pliny [Roman savant and author of Natural History in the first century], locusts are certain creatures that people of Parthia and Ethiopia used to eat. But some say the tops or buds of trees or fruits are meant. [Tyndale>John the Baptist came not to impress with his diet and strait living, which outward things pertain only to the taming of the flesh, but he came to preach, as the voice of a crier.] b) By the wheat and the chaff are understood the good and the evil.
Luke 3:17. 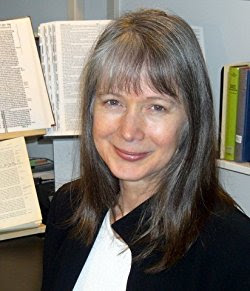 Ruth Magnusson Davis is a retired lawyer with an undergraduate degree in languages, and a conservative Christian. She holds to the fullness of Reformation doctrine, with one foot in the camp of evangelical traditional Anglicans and another with the Lutherans. She presently resides in Canada.

In 2005 Ruth formed her little company, Baruch House Publishing, to publish her first book, 'True to His Ways: Purity & Safety in Christian Spiritual Practice,' released that year.
In 2009 Ruth retired from law and founded the New Matthew Bible Project, dedicated to gently updating the Matthew Bible, a little-known Reformation Bible. The Matthew Bible was the joint work of 3 men early in the Reformation: William Tyndale, Miles Coverdale, and John Rogers. Few people realize that the Matthew Bible formed the basis of the King James Version. Ruth's goal is to maintain the historic language of the faith while making these old scriptures plain for today's reader. The updated version will be called the New Matthew Bible, or NMB for short.

Ruth completed her work on the NMB New Testament, and it was published in April 2016 as 'The October Testament.'

Posted by Kathleen Higgins-Anderson at 11:33 PM