Pump Up Your Book! Announces Sealed Up: The Course of Fate: Book One Virtual Book Tour & Win Prizes! 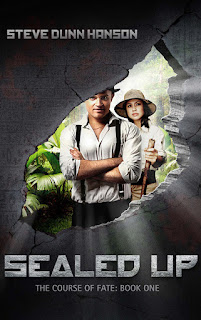 FOR IMMEDIATE RELEASE: Pump Up Your Book! is proud to announce Steve Dunn Hanson’s Sealed Up: The Course of Fate: Book One virtual book tour January 3 - March 31.  Steve will be guest appearing at blogs throughout the U.S. and international regions talking about his phenomenal new action/adventure/suspense novel that critics are calling “Fascinating. Intricate. Intelligent.”

Hanson has lived in places that grew him – from a small Idaho farm town, a run-down neighborhood in St. Louis, and a middle-class southern California community to Sydney, Australia and Bucharest, Romania. His experiences are as varied as the places he’s lived.  He says, “I have a hopper of ‘reality’ including being a volunteer jail chaplain and flying with a U.S. presidential candidate in his small plane when an engine conked out.  And all of this is fodder for my writing.”

In Sealed Up, UCLA anthropologist Nathan Hill, is in a funk since his young wife’s death, and learns of staggering millennia-old chronicles sealed up somewhere in a Mesoamerica cliff. This bombshell rocks him out of his gloom, and he leads a clandestine expedition to uncover them. What are they? Who put them there? No one knows. But, self-absorbed televangelist Brother Luke, who funds the expedition, thinks he does. If he’s right, his power-hunger will have off-the-charts gratification.
Striking Audra Chang joins Nathan in his pursuit and brings her own shocking secret. As they struggle through a literal jungle of puzzles and dead ends, she finds herself falling in love with Nathan. Her secret, though, may make that a non-starter.

When a shaman with a thirst for human sacrifice, and a murderous Mexican drug lord with a mysterious connection to Brother Luke emerge, the expedition appears doomed. Yet Nathan is convinced that fate—or something—demands these inscrutable chronicles be unearthed.

And if they are . . . what shattering disruption will they unleash?

If you’d like to follow his tour stops, visit http://www.pumpupyourbook.com/2016/12/09/pump-up-your-book-presents-sealed-up-virtual-book-publicity-tour-win-25-amazon-gift-card/ and you may win a $25 Amazon Gift Card or an autographed copy of his book. Please leave a comment or question at each of his tour stops to let him know you stopped by!

Pump Up Your Book! is an award-winning virtual book tour agency for authors who want quality service at an affordable price.  More information can be found on our website at www.pumpupyourbook.com. While there, check out our Authors on Tour page to see what we have coming up in the months ahead. We’re always looking for new bloggers to join our team.